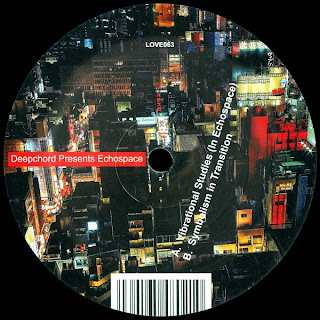 For those in the know "dub techno" had been around since the mid to late 90s pioneered most notably by  the duo Moritz von Oswald and Mark Ernestus, aka Basic Channel (the name of the artists as well as the label).

Though its root go much deeper, Basic Channel, along with Deepchord (aka Rod Modell), are the foundation stones of the dub techno sound.

In 2007, Deepchord Presents Echospace (Modell's pairing with Steven Hitchell) dropped The Coldest Season and dub techno seemed to suddenly explode out of the underground earning many a Top 10 list for 2007.  It remains essential, no matter what one's music preference.

For the  next few years the depths of the Deepchord/Echospace catalogue, as well as their deft touch as remixers, emerged out of the underground and into the consciousness of those drawn to the sound.

In 2010, in anticipation of the follow-up Liumin, this 12" EP was released.  As hard as it was to imagine, they took what had become an almost formulaic sound and changed it.  The sub aquatic background noises, the depths of the bass and the warmth of the analogue were all preserved but it was different, new.

Once again, quietly, they had innovated and showed why they continued to lead rather than follow.

P.S. The track 'Symbolism in Transition' receives a reworking as 'Orbital' on their 2012 release Silent World (Original Motion Picture Soundtrack).
Posted by aorto at 3:54 AM