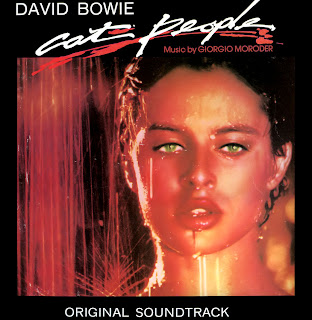 Cat People was one of those movies that haunted my memories long after seeing it.

David Bowie's "Cat People (Putting Out Fire)" is an incredible track, much better than the version that appeared on his Let's Dance album.

It was used in an episode of Miami Vice and it most recently appeared in Quentin Tarentino's Inglourious Basterds) which stars Nastassja Kinski. Yes, the circle remains unbroken...

Though far too short, the soundtrack to the film by Giorgio Moroder is amazing. It still sounds good.

Long before the advent of CDs and mp3s I mixed this with Risky Business from vinyl to cassette to create a Risky Cat Business People score that I used to play while driving late at night. Still have both on vinyl, Cat People still sealed.