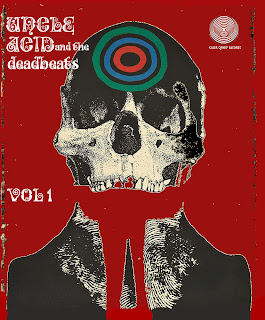 You've never heard anything quite like this...but you'll swear you've heard it before. Even if you haven't, you will. With two extremely limited releases to their name, their third album is set for release and may just lift them out from the underground.

Now I must confess that I wondered whether or not to even put this up here as there is something menacing about this music paying more than just a nod to Black Sabbath and there is a lingering feeling that their fascination with b-movies, horror flicks, murder and mayhem isn't just for show. However, the same thing was said about Ozzy and his music ended up in car commercials. Such is the machine.

Amidst the lo-fi fuzz and distortion there is melody here. At times punk, at times garage rock, at times 70s metal, at times late 80s to early 90s alt rock (think 'I Am One' or 'Still In Hollywood'), there is something refreshing and raw here. Demdike Stare shares a similar throwback fascination, as does the Ghost Box label, though their approaches are musically quite distinct.

Even though I'm certainly not into the rock thing anymore, this one caught me off guard. The rarity (20 copies on this one) piqued my interest but the music hooked me. As infectious as it is I don't know that I'll spend more than a passing interest (I can only stand heavy guitars for so long) but for a moment that anarchist surge of youth crept right back up and I felt my head starting to move as if on its own.

I've seen this labeled as doom, psychedelic, metal, occult, stoner, rock. Everyone likes to claim something outside the mainstream as their own but as for their second album, Blood Lust, they've taken their machinations and made them even more menacing. Is it camp or is it the real deal?

"Look down LOOK DOWN along that junk road before you travel there and get in with the Wrong Mob..."