Ah, the early days of blogging, when the "wild west" still ruled and the exploration was fresh and uninhibited.

Hypnotic Breaks was one of the best blogs online and it introduced me to the genre of dub techno. Sadly, all that remains are snapshots from the waybackmachine here and the lingering remains of the actual blog here.

I had become familiar with dub techno through Echospace's The Coldest Season but was still a newbie to the sound having just emerged out of what, in hindsight, was a progressive house/trance phase that had lasted for more than a decade.

A compilation was put together in 2008 and it sent me down the rabbit hole from which I've yet to return.

Fortunately, one of my online compadres had retained this in the archives and has graciously offered it up as a trip down memory lane for those of us who have been swimming in it and a great intro to it as it re-emerged and morphed from the Basic Channel blueprint to which it is anchored. 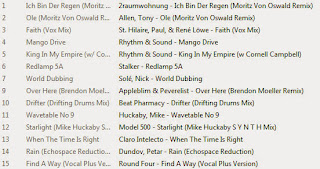 So, for your enjoyment, go