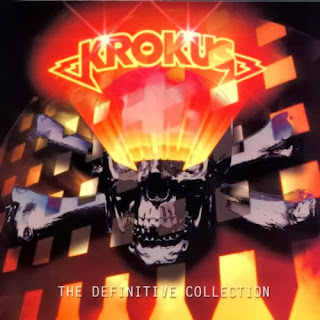 My formative years were forged by 80s metal, specifically the "hair metal" bands (the heavier metal would come later and merge into the burgeoning grunge thing). It was my first attempt at teenage rebellion out of Top 40 hell.

I was always one of the ones pushing the barriers of my insulated suburban trapping, the first one on the ol' block to pick up Mötley Crüe's Shout At The Devil and other bands discovered on late nights when MTV actually played music. These all pretty much condemned me to a fiery end.

One of the bands from that time was the heavy metal outfit from Switzerland (!) shown in the image above. Perhaps most notable for their cover of a British glam act's biggest hit as one of their own biggest hits, they did put out a few killer tracks on their own right.

"ETR" was a definite winner as was the obligatory ballad track.

Brings back some great memories.

If I'm ever so motivated I will whip up a compilation of those "deep cuts" (e.g. Fastways "Far Far From Home") that fell under the radar as this music became popular and made its way into the Top 40 hell from which I sought to escape.
Posted by aorto at 1:23 PM