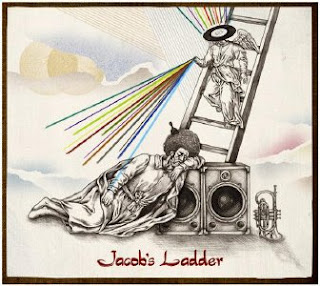 Well, went ahead and tracked this down from Japan.  Found a great seller through Amazon Japan. Great communication and had it to me after payment in three days. That's better than a lot of the shipping I've had from here in the States.

And for some reason, Japanese releases are often far superior in content than their U.S. versions (probably so they can hold out and release a "deluxe" version in the future, one that was already available in Japan...).

Find it odd that amazons from around the world (paypal and ebay too for that matter...) aren't better linked. Love the online translation though.

It's a nice compilation of some jazzy, hop-hop kind of tracks.  Nice vibe.

The CD is now listed in the discogs database.  Here is some info on the EP version if you're feeling generous.

Another exclusive that can only be found at HTCIS.