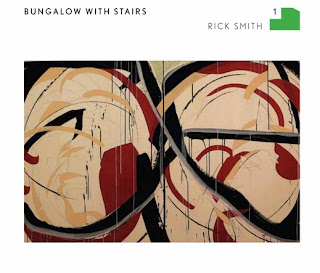 The Underworld duo are involved in much more than just music. Rick Smith, the producer backbone of the Underworld sound, also does project work as Bungalow With Stairs. This album was released with one of Karl Hyde's art installations in Tokyo as a limited edition CD of the exhibit soundtrack to those who attended.

I knew nothing about this release until doing some virtual digging. For some reason, I'm on an Underworld kick and have been for a while now. Karl Hyde's upcoming release is the tip of the iceberg. I suppose it has to do with recapitulating my past and enjoying their artistry as it evolves as they age as well.

Apparently made up of older material (you'll recognize a few snippets that would later end up on Beaucoup Fish) as well as manipulated spoken word samples, you'll discover that "ambient" sound that lies lurking behind all of Underworld's music, that sound that adds soul to the ecstasy their music invokes.

You can learn more about the design collective Tomato which the duo were part of founding in 1991 here. You'll instantly recognize the album artwork.