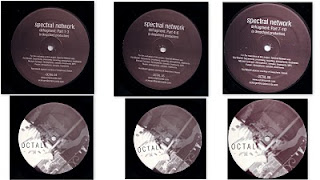 For fans of Rod Modell's Incense & Blacklight (and the whole DeepChord sound, for that matter), you will find yourself swimming in familiar terrain.

The tracks "Aloeswood" and "Ultraviolet World" were previously released as "Part 8" and "Part 9", respectively, on Spectral Network's Defragment: Part 7-10.  "Aloeswood" is an edited version of "Part 8".

A bit of background information on these releases:

Featuring 10 tracks and over 75 minutes of new material on 3 vinyl releases, this is the first new official Deepchord production in four years.

The concept for these releases began after Sickinger wrote some tracks and sent them over to Ruxpin for collaboration on a new Spectral Network album.

After Ruxpin did some remixing and reconstruction, Sickinger sent them over to Rod Modell, founder of Deepchord, for further processing. Rod went in the studio and manipulated the tracks to the extreme and gave them the infamous Deepchord treatment that he is so widely known for.

Defragment was the result and it is now being released as a Spectral Network project.

For the realization of this project, Spectral Network was:

An interesting album, if you listen to each part consecutively you can almost sense the development from straight up bouncing techno and its evolution into Rod's fascination with what is happening behind, beneath and around the beats.