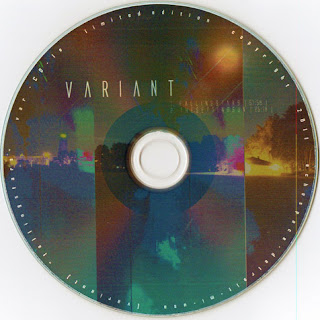 I have become more and more interested in the "behind the scenes" aspect of the music I listen to. I'll leave out the details but when I first encountered various, uh, chemical alterations to my brain, I had experiences "seeing" the music I was hearing. I've never been able to get back there and, fortunately, I realized the futility of such a means to do so but it opened a door. With modern technology, even for those with little technical music background other than sheer passion and appreciation for the music, there are many ways of "seeing" what our ears hear.

Variant's "Falling Stars" has been one of my favorite tracks since I discovered it way back when on the digital boomkat release. 52 minutes of bliss that disappeared when the CD was released and was excited when it was re-issued and ecstatic when it was expanded to 62 minutes.

I was working on doing some mixing (it is so much harder than it looks) and noticed the spectrals on the different versions of this track. I post it here because 2013 has become the year of the re-issue and is often tagged with the 'remastered' thing. I've lost track of how many things are remastered and it seems as if the industry repackages the same thing year after year as a 'remaster' to eke just a few more dollars out of old material.

However, as I am learning, remastering can often make all the difference. Sometimes it's just louder. A quick search online will show you the 'loudness wars' are a hot topic when it comes to remastering. It's big business.

Below are the spectrals for a track from Brock Van Wey's White Clouds Drift On And On. The top is from my personal copy of the original CD, the bottom is the digital version (I'm assuming it is the boomkat version that has been available for a long time).

It appears to me that it is 'louder' because it seems that the entire track is 'turned up' rather than fine tuned. To the best of my knowledge this album was not remastered until the vinyl release last year. A remastered Japanese CD version supposedly exists as well.

Below are the spectrals for a track from Variant's Falling Stars. The top one is the final release (my rip); the middle is the "reprise" version from the first version of the CD remaster (one of only 25 copies made, my rip); the bottom one is the original file from boomkat.

There is a huge difference in the 62 minute version, aside from the length, and it is very audible. It is also very visual. I knew it the first time I listened to it. To my ears this is not simply a 'louder' remaster, it is a remaster that is done right. The difference between the original and this one is stunning.

I just thought this might be of interest to some folks here. I may be mistaken since I am no audio engineer and would really love to hear others' thoughts on the subject.
Posted by aorto at 1:11 PM