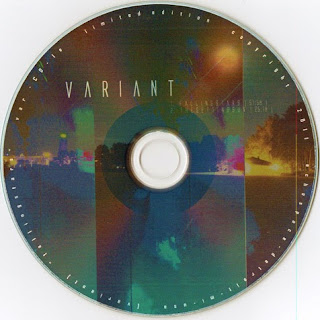 Variant, for those who don't know, is the alter ego of Steven Hitchell (aka Echospace, aka Intrusion) with his more "ambient" side. The project has evolved and has moved beyond mere 'ambient' into more ghostly atmospherics extracted from the machines.

This was quietly released originally as a three track digital release and it contained the 52 minute "Falling Stars" that soon disappeared once released on CD and was replaced with a few new tracks. Due to fan interest, the long deleted track "Falling Stars" track was re-issued as a stand alone CD in 2011.

Originally slated to contain remastered versions of two tracks from the original digital release, the final release version has only the original track remastered but with an additional 10 minutes added on.

The biggest difference, and the reason this is posted here, is to highlight the difference in the remastering of the original. Sometimes 'remasters' are just a way to milk cash from an already exhausted release but in this case, the remastering is audibly mind blowing.

The top is the master; the bottom is the original. For those who know how to read these the audible is strikingly visual as well. Pick up a copy from the BC page or track down a used copy of the sold out CD. Once you've heard the remaster there is no going back. Worth every penny.

There are five variations of The Setting Sun/Fallings Stars release that exist:

Pretty cool that an artist listens at the level of re-releasing something due to fan interest.

As has been my mantra for some time now: support the artists and support the independent labels.
Posted by aorto at 2:12 PM