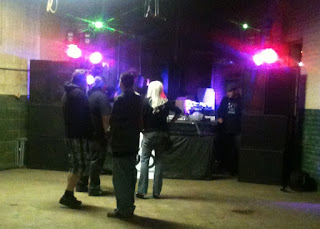 This is really a tough review to write. With the expectation as high as it was, it almost didn't seem like it could be met. And, truth be told, it wasn't. Which turned out to be a very good thing.

For starters, my wife and I spent Saturday night across the river in Windsor, Canada. The entry to the Windsor Tunnel is right at Hart Plaza where the festival was happening so we got to drive by the festival and the music got my blood pumping right away. I really do love this music. That night you could hear the music across the water on the river walk that was walking distance from the hotel where we stayed. A beautiful night and a beautiful morning with lots of downtime.

We moved on to check in to our hotel in Detroit on Sunday morning (couldn't get a reasonably priced room on Saturday night in Detroit).  On re-entry into the U.S. when asked by the INS guy at the gate where we were headed the look on his face was priceless when we told him we were going to DEMF.  He said we sure didn't look like your typical ravers (one guy at the party later that night told me, more than once, that I looked like a cop).  Life is full of surprises, no?

I've spent a lot of time in Detroit because of my job so am no stranger to the city. The Michigan Central Railroad Terminal, Motown, the empty buildings downtown, the wide main arteries in and around the city. I have grown fond of it (reminds me of my hometown on a much larger scale) so we spent the afternoon driving around the city looking at familiar sights, stopping for breakfast and lunch at a great cafe on Woodward and finally locating the party address.

Anyhow, not knowing what to expect we showed up super early around 7:30 p.m. and stood outside the warehouse. (I'll see if I have better photos, never think to take them until after the fact.) 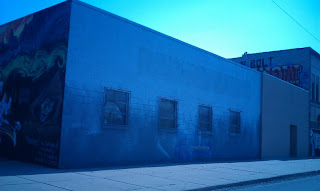 One of the guys from the production company introduced himself to us and ended up inviting us in. Great group of people all the way around. It was just an empty warehouse with a sound system and a makeshift movie screen. You can see in the photos the warehouse and the basic set-up all the way through a few fuzzy photos of the night in full tilt. We got to watch the entire evening unfold from scratch.

I have a few photos that you can see:

The photos basically show the warehouse space as we entered. Quick video shot by my wife sets the scene pretty well. No chairs, sitting on the floor. A few people in there working out logistics and sparse decor.  Movie screen, sound system, strobe lights. Pretty basic and to the point.

I recognized Steve and walked up to him and introduced myself.  He took the time to talk to me for a bit in the midst of the madness which was way cool. Super down to earth guy and funny. It was great just to have a chance to thank him in person for the music.

It was a great two hours just walking around inside the warehouse, hanging out, chatting with people from the production company and watching as the other artists and first party attendees strolled in. Had the evening ended there I would probably have been perfectly content.

Slowly the evening unfolded. The first couple of acts were good but it wasn't until JPLS dropped his set around 1:00 a.m. that the mood really elevated. Bare bones minimal techno, raw and pounding, got the crowd moving. Though I haven't been into "the scene" in almost 20 years, it all came flooding back. You could feel the energy building.

Echospace came on around 2:30 a.m. I had been expecting to sit down and watch the film of "Silent World" as Echospace scored it live, much like I saw Koyaanisqatisi a few years back with Philip Glass playing live as the movie played on the big screen or Demdike Stare scoring The Nude Vampire live. But the film, it turns out, was basically a backdrop and not the main event. This was not a sit and watch the movie as "Silent World" played. This was an old school, full on warehouse rave, even the Echospace set. And they brought high energy.

I could certainly feel the energy and the beat of the music but could not make out the finer points of the tracks played because it was overwhelmingly loud (even with earplugs fully engaged). There's a brief video snippet with distorted audio that may give a sense of the volume. I don't know what the set list was though I've read that it was Liumin/Silent World reinterpreted. It was a wall of thumping, rumbling sound that almost moved your body for you. Like my days of old I could feel the vibe in the room elevating and the enthusiasm building as the night rolled on and you could tell these guys have been around and know how to move a crowd.

I think part of the thrill of the night, aside from just being there, was the realization that this was a throwback in many ways, though obviously in a new context. Though it was an empty warehouse the setting was well choreographed through social media; though it was an artist with an evolved style of music, you could feel the warehouse roots buried in the evening coming to full fruition. I was transported back in time to twenty years ago and yet it felt incredibly fresh, a mixture of nostalgia and the thrill of discovery.

From what I've seen posted on the Echospace FB page and Hitchell's own FB page it seems that this night was quite special for everyone, truly a night to remember. Aside from the performers (The Flashbulb and Terrence Dixon perhaps the most well known), I've seen it mentioned that Luke Hess and Kevin Martin (aka The Bug) were present in the room that night.

We did not make it to the closing acts. With no windows in the room, the cigarette (and other) smoke was eventually suffocating. But I am more than content. It was an astounding weekend and I haven't been so elated from an adventure in quite some time.

P.S. Apparently the show was recorded and may be released in the future.  I can't think of anything else that would make the evening more complete.
Posted by aorto at 4:39 PM