In light of 70s zeitgeist I'm sure the director was trying to get across some deeper metaphysical or philosophical point of view.  For an in-depth analysis of the film you may find that meaning here.

The ticket?  A far cry from the keepsakes of old. 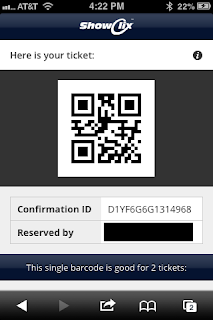 As for the show itself there was a quick, softspoken intro and, with no fanfare or sensationalism, Miles Whittaker and Sean Canty casually took a seat in from of their gear and got down to work.  Their gear - some analogue equipment and a turntable - was right under the screen.

The photo below is from after the show but gives an idea of the setting.  Miles Whittaker was talking to, I believe, Andy Stott (who had a show later that evening at a different venue).  Sean Canty, who manned the turntable, had stepped out.  On a side note, while they both used Apple laptops, Miles Whittaker's had a sticker of some kind over the glowing logo. 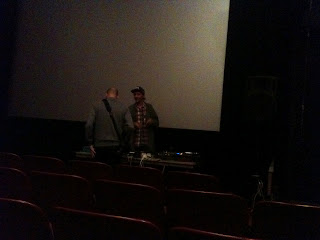 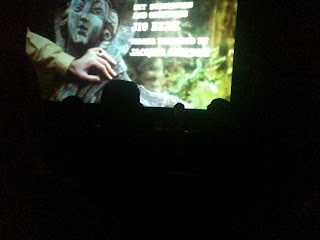 The end of the show was the same.  Some applause and a quick highlight of other events happening throughout the week and that was it.  It was perfect, just two guys who dig music playing for a group of people who dig their music.  No drama.

The show itself was around an hour or so long.  The film itself was edited and the music worked in sync with the film.  It was shortened and at least one of these scenes got an extended remix which was both comical and eventually quite hypnotic.  Not sure anything was lost in the shorter version or not.

As for the music, below is a performance of them live at The Boiler Room which gives a taste of the sound.

By the way, check out some of their videos online and you'll get a clue of how they can take what is otherwise a campy film and give it some real creep value.  Remix culture is alive and well.
Posted by aorto at 1:21 PM