Echospace in the mailbox... 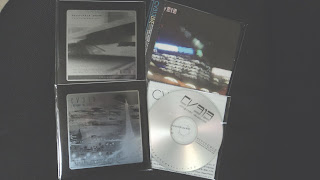 Ok, shameless plug, I admit...
But what an interesting thing this new music distribution.  Forget the majors, they can just disappear along with all the other "talent" shows on television these days.  With the exception of Marvin Gaye's 40th Anniversary deluxe deal, I can't tell you the last time I bought anything (knowingly) from a major label.
Independents are alive and well so we really need to support them or they will disappear as so many independent labels have over the years (or, worse, been bought out by a major).
Deepchord/Echospace is the one artist/label that has been a constant since sometime around 2007 with their The Coldest Season release.  I've since dove deep into their back catalogue and remain entranced and thrilled by what is there.  Been a long time since I've been so passionate about any artist...
I discovered The Coldest Season via the web.  Never would have found it any other way, not even close.  And my first listen was, of course, by a shared download.  However, since then I have probably spent 10 to 20 times (or more) the original purchase price on later (and previous) releases.
Why do I pass this story along?  Not to defend sharing files (though I do, if there is an ethic to it) but to advocate a choice, a commitment, to support the artists/labels that you dig.  It has to be a conscious choice, especially when everything is so freely available online.
Download it, listen to it, but by all means realize the expense involved in music creation.  It's the little guy, the guy that truly loves music, that needs the support to continue, or at least supplement, the making of music.
My daughter is a musician (went to a show of hers last night - hip-hop/rap, of all things - in a pub downtown) so I know firsthand the expense and labor involved in music creation.  It ain't cheap.  Many artists have "real" jobs to afford them the means of making music.
So I highly value these CDs.  They came directly from the label after direct communication with people from the label who are close to the artists.  No middle man, no distribution chain, no mumbo jumbo.  You can get a feel for what the artist is really about (for better or for worse) in this way and it is perhaps the best thing about music today.  So when you give the money, you know exactly where it is going.  It is quite personal (and not in the obsessive, weird kind of way) and really cool.
There are some really interesting stories about how the two new releases came to be and how it never would have happened in the old traditional way.  Do whatever you can to keep the feedback loop going - there are artists out there who are listening and are really in it for the music.
So here's the scoop on the albums, if interested:
DeepChord Presents Echospace – Spatialdimension (2011) - limited edition of 100
cv313 – Beyond The Clouds (2011) - limited edition of 100
cv313 – cv313 - Live - DEMF After Party In 2008 (2009) - limited edition of 300
Posted by aorto at 5:19 PM