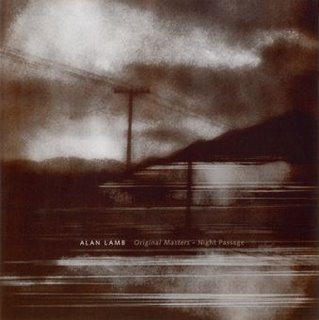 One of the more visited pieces of music in my collection (much to my GF's dismay...) is Alan Lamb's "wire music" as found on two CDs he has released of the recordings.

Several things prompted me to experiment a little.

At the end of a road trip last week, Murcof's The Versailles Sessions (another challenging yet essential work) was accompanying me and as "Spring in the Artificial Gardens" ended it struck me that David Hyke's "Rainbow Voice" (that I first heard in one of my favorite films, Baraka, essential on Blu-Ray), would blend perfectly into this.

As I started to put this together I decided to use Alan Lamb's "Night Passage" as the foundation. Something about the cacophony of the Murcof track seemed to fit. The 24:51 track length is the entire Lamb piece on its own.

There are two versions here:

#2) The recent post of The Conet Project has a video of a mix with Lamb's "Last Anzac" piece and I figured a random sample of these recordings would fit in with the mix.

Finally, thrown in to boot was "Among the Shadows" from Anders Peters' latest, Eerie Calm Reincarnate. Since he is into found sounds as a basis for his "eerie" soundscapes, it all seemed to gel.

#4) I toned down the wire music to bring out the other songs in the mix more clearly.  "Among the Shadows" was replaced with "Her Face" so this one's got some beats and The Conet Project track was replaced with "Origins" from Darrin Verhagen's Soft Ash, an "aural treatment of six different fatal gaseous clouds, most of which being mostly composed of sulphur dioxide." (Source)

Certainly not everyone's thing and certainly not "music" in the usual sense (whatever that is) but hopefully you'll find it interesting...