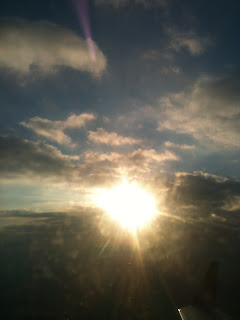 One day marathon trip to Kansas City. Listened to over 100 tunes. Stopped writing them down after a while but the shuffle at the beginning of the trip was almost flawless for an early morning start. A few Max Richter and Mark Isham tunes captured the essence. 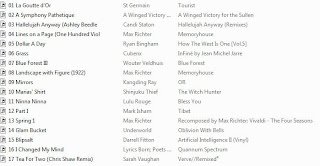 A few minor thrills and discoveries for me in the mix. While listening to "Marias' Shirt" from The Witch Hunter I instantly recognized the similarity to "Music For Satellites" from Circlesquare's Songs About Dancing And Drugs. Happened to pick up the Traktor app free this week and dropped the two tracks in there.  Lo and behold, they sound remarkably close. Don't know the app very well and don't have any other software to do a full working of the two but it's a cool feeling to have that level of recognition from music so diverse.

Also, the track "Ninna Ninna" from Lulu Rouge's Bless You completely album blew me away. I can't recall having ever heard it before even though this album has been a consistent staple in my diet over the years.

Anyhow, more travels South this week, been way busy at work and on the home front I'm being stretched to grow personally. Gotta remember that without resistance there is no struggle. I am not in control. And, when I stop for a moment, I do realize that I really don't want to be in control because it limits my life experiences.

I'll try and get some more interesting photos for the next mix. How many photos of scenes from an airplane do we really need?