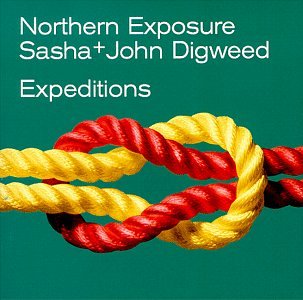 The last of the Northern Exposure releases by Sasha and John Digweed, it is apparent on this one that not only has their mixing skills remained as good as ever but electronic music was out of the underground.

The UK edition of the CD release contained a remix of Delerium's "Silence" (featuring Sarah McLachlan), a track which is still ubiquitous, which is not present in the U.S. release mix.  According to Sasha's website it was pulled due to licensing issues.

Electronic music was on its way to mass popularity (as can be seen by this albums U.S. release on a major label) and copyright was beginning to escalate and affect how music was made and distributed.

Truth be told I didn't realize this until putting this post together as my digital copy of the mix has the track in it.  To me, this makes the whole U.S. release a total and complete waste.

I used to own this on vinyl and sold it off a few years ago but, for your pleasure, digital files of the vinyl are below.  The "Silence" track is present on the vinyl.