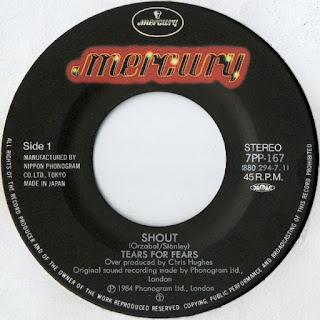 Some time ago, while listening to Kirk Franklin's Hero album, the song "Let It Go" caught my ear because of the sample of the song "Shout" by Tears For Fears.  I remember when the original was first released and, since this was the heyday of when the the 'M' in MTV stood for music, remember the video as well.

Aside from the deeply personal lyrics of Franklin's song, I was taken aback by a "gospel" artist using a "secular" song.  Music is an expression of the soul, a longing for what is Real and True, so this is not a personal judgment.  There is a false dichotomy present in the church world between the 'sacred' and the 'secular' as all of us move somewhere in between these two poles.  Music - from the darkness to the light - gives voice to where we are on that continuum.

Familiar with Concrete Blonde's take on the song, I decided to do a search of the song and found that many have covered this song.  A trademark of a good song is when other musicians find in that song an expression of what they are trying to say.  For those who make fun of the 80s, they are looking in the wrong place for great music.

I put together a compilation of remakes or songs where this track is sampled.  This isn't all of them (opted not to put the death/power metal versions on here) but this will give you a good taste of the variety.  Also included are various mixes and versions of the original.

Something a little different.