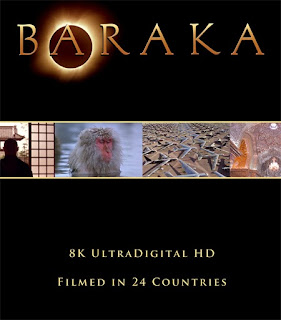 Long, long story time. This was taken from another blog I manage and, due to resource upgrades, I was able to make an improvement to the original compilation (found way at the bottom). The original post can be found here (I'll try and repair broken links when time permits). This isn't the official soundtrack, mind you. This mix contains track not found on the official soundtrack as well as extended versions of the tracks found on it. I originally called it the "other" soundtrack because it includes what should have been on it.

In 1994 I was living in Seattle, having found myself there after several months on the road after quitting a "real" job and hitting the road (fueled by confusion, madness and drug use...). It was quite an experience.

One of the memorable moments in the drug-fueled period of my life was the opportunity to see the film Baraka in all it glory on the big screen. I don't know if it was in the original 70 mm Todd-AO format though it may have been. All I know is that I was stoned when I went to see it and was mesmerized. In the midst of a spiritual crisis/catharis, the subject matter of the film was right on point. It was where I was at the time; it was also where I wanted to be. I sat in a stupor for about an hour and a half as I absorbed the images and sounds of the film. If you've never see it, you must see it at least once.

One of the pivotal moments, at the height of my buzz no less, was a scene in a trash dump in India where people are rummaging through the trash while Dead Can Dance's "Host of Seraphim" is playing. I was frozen in time. Never had I been so moved during a film; never had I felt a song so powerfully. It was, for that moment, transcendent. Even now as I listen to the song, it takes me there, a perfect memory capsule of a moment frozen in song.

Now, fifteen years later and a bit more worldly wise, I have found that many of the images in the film are based in settings that would be considered the tourist variety and the film itself is structured to "sell" a point. Though profound and moving it is now fairly obvious. Perhaps maturity and experience has shattered the illusion but it doesn't take away from the original experience for which this was a pivotal moment. This is a risk as we age, that we condemn and become cynical about those things that profoundly altered our worldview. But this film educated me and was instrumental in my desire to see the world in context.

One of the scenes which freaked me out at first was early in the film when a group of men, all seated, perform some kind of a dance in the jungle, all led by an older "shamanic" figure, eyes glazed over in a hypnotic trance, arms in unison as the bodies sway back and forth to the rhythm of the chant. A striking visual.

Here is a sample from the film:


Years later I would learn that this is a staged performance called Kecak, or Ramayana Monkey Chant, a musical drama performed in Bali that celebrates an ancient Sanskrit epic. While it has its roots in sanghyang, a trance-inducing exorcism dance, it has become a "Westernized" version of the original.

A German painter and musician, Walter Spies, became interested in it during the 1930s and transformed it into a performance piece. Spies worked with Wayan Limbak, a Balinese dancer, and Limbak popularized the dance by traveling throughout the world with Balinese performance groups. These travels helped to make the Kecak known throughout the world.

This transformation is an example of what James Clifford describes as part of the "modern art-culture system" in which, "the West or the central power adopts, transforms, and consumes non-Western or peripheral cultural elements, while making 'art' which was once embedded in the culture as a while, into a separate entity."

Here is a more telling photo: 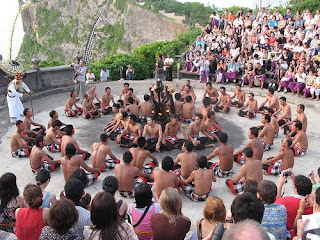 To what extent is education exploitation? Too cynical? Is my desire to keep such cultural elements confined to their historical roots a sign of the same "spirit" of Westernization, an elitist version of creating an exotic "other" for voyeuristic purpose?

Speaking of exploitation, tourism and Sufism, this all reminds me of an article from Hakim Bey, one of my favorite anarchist writers, about Overcoming Tourism...

This film was my first exposure to the music of Dead Can Dance and I would, over time, absorb anything related to their music, discovering many artists on the legendary 4AD label. Even today, it is still some of my favorite music.

However, much of this had to do with the mystique I created around their music. I envisioned some mysterious, mystical, exotic group whose music was angelic, ethereal, transcendent. That wasn't the case but the music of Lisa Gerrard, vocalist for Dead Can Dance, is truly amazing. She is perhaps most known for her work in the film score for Gladiator. Like much of my early spirituality, I chose to believe in a myth of my own making, a self-idealized projection that led to living in a world of illusion I created.

Time, age and maturity can often dampen the original joy of an event but this film changed my worldview and instilled a deeper desire for exploring the religious life. With music from around the world buoyed by a score from Michael Stearn (a favorite of Hearts of Space), it's a gem. The music is incredible though I think the weed enhanced the music to an extent I haven't experienced since.

Actually, the last time I watched the film itself I was tripping on LSD and in one of the early scenes of a mountain, I saw the face of Jesus being molded, melting, out of the mountains, a liquid face morphing and changing but still clearly Jesus.

I don't expect you to see Jesus there but I did, plain as could be. It was a charcoal etched vision of him in Fritz Eichenberg or Gustave Dore style (no halo, though) but it was unmistakable. I wanted to stay in that moment forever. Sadly, the crew I was with wanted to trip to something else and ejected the video.


A soundbyte from this film can be found in Jonathan Lisle's incredible Original OS.0_2 mix on John Digweed's Bedrock label and if you watch closely you'll see stills of the film in The Matrix Reloaded when Neo speaks with The Architect.

It's amazing the things that frame our worldview. Because this film so impacted my life (and, obviously, the lives of others) it has become a way of framing my perception of the world and is thus instantly recognizable when placed in various cultural media, a signpost, common ground among a larger tribe, all on the same journey, like product placement (is that irony or cynicism?).

The CD version of the film was too short and left out a lot of the subtle musical gems from the film as was the case with both Koyaanisqatsi and Powaqqatsi. What a peculiar twist having paid $75 for a used VHS version of this movie off of ebay after it was pulled from the shelves of Blockbuster when it went out of print. I can't help but think that there is something ugly and sinister about the material product of media proliferation.

My wife and I saw Koyaanisqatsi performed live in Pittsburgh, Pennsylvania with Philip Glass leading his orchestra as part of an effort to fund the finishing touches on the third piece of the trilogy, Naqoyqatsi (or, as my wife calls it, quite prophetically, Not Quite Qatsi). Having heard this live with the film playing on a movie screen in the background was comparable to my viewing of Baraka, though I was sober this time.

Life without drugs and addictions. Being grateful. No regrets. Enjoying the now. To live without illusion. It really is possible.

So, for your enjoyment