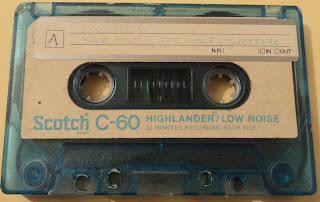 Tonight I was doing P90X (plyometrics, if you're wondering) in the basement and, as I often do, sought a distraction in the midst of the pain. Found an old milk crate full of cassette tapes and remembered this one. So, story time..

This has to be from 1982 or thereabouts. Growing up in the suburbs I was force fed a diet of classic rock and Top 40 radio and it bored me to tears. I've never been one to do what is expected so always sought out new and different sounds.  That shouldn't surprise anyone here.

Fortunately I lived in between two larger cities so had access to more "alternative" programming. One of those was WDMT. WDMT was one of the first radio stations to start airing "rap" music as part of its programming so living where I lived I got to tap into it in its early stages. This was long before Yo! MTV Raps. 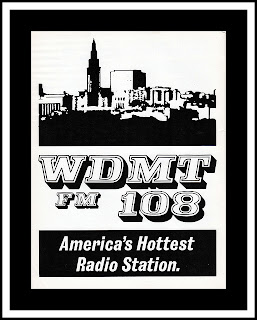 Next to my bed was an old digital clock radio (which is currently in my house, still functioning) and I used to take an old vintage Sony tape recorder with portable microphone and place it right on top of the radio to record these songs. As you can tell on the label these were "lousy recordings" but thirty years later they are still in my basement. This wasn't music my circle of folks listened to so it felt a bit rebellious, especially having just hit the double digits in age.

So for something a bit different here's a mix of the three songs from the tape as well as some early "old school" rap tunes that laid the foundation (and one bonus track). I wasn't hardcore but clearly remember when rap emerged from the shadows and it added to my love and appreciation of all kinds of music. 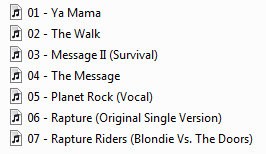