I first discovered bvdub (aka Brock Van Wey) with his White Clouds Drift On And On CD right around the time I first stumbled into the dub techno universe when blogging was still in its heyday.

As with many artists I began a full immersion into everything he released (and went near broke trying!). On an old incarnation of his web page I learned about his back history as a DJ with roots reaching into the 90s.

His web site no longer contains these mixes and they seem to have vanished from the Web unless you know where to find them. So for your convenience these are the mixes I have in my archives. Most are from the old bvdub site, some from other sites, but all are essential trips. 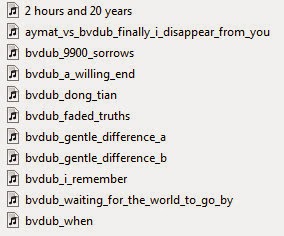 As they were released free I don't think that Brock would mind them being posted here. An amazingly talented and prolific artist, I could have his stuff on repeat all day long and be lost in bliss.